Asked about influences, Sas replies; when I hear Jeff Beck play it starts to itch. He plays with such simplicity and at the same time with such fanaticism. Unbelieveable. I am a real Jimi Hendrix fan too. He has not yet been surpassed. Stevie Ray Vaughan I think is fantastic, but the difference between him and Jimi is that if you were to hear him every night you will notice there are only minor differences in his playing. Whilst Jimi could be stumbling over his strings one night and the next night be so brilliant that you would seriously consider selling all your gear. Jimi knew no boundaries. When he was doing Hey Joe, his mind was already busy with totally different things. What he wanted to do with Miles Davis I think is fascinating. I am a real Miles Davis fan. He is the Jimi of the Jazz world. When I was just 16 I saw Buddy Guy. He played with great dynamics. Dynamics, in my opinion, are one of the most important tools in music; a quiet song with a strong bridge or a loud song with a very quiet bridge. And of course Rory Gallagher, my greatest hero. I had the privilege and honour of playing with his band 3 times. The Allman Brothers Band is fantastic too. Once they get started, there is no stopping them. Just like us. 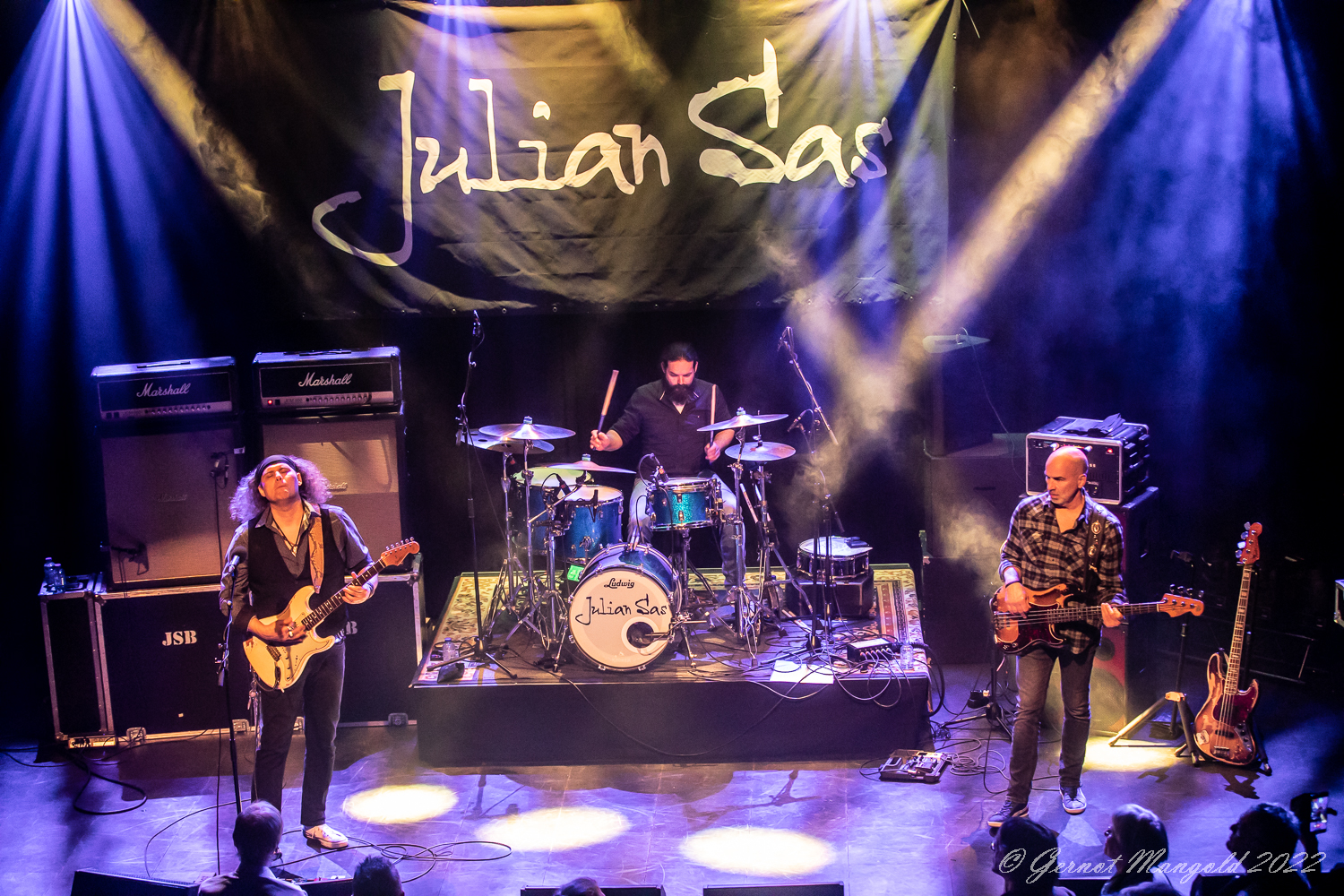 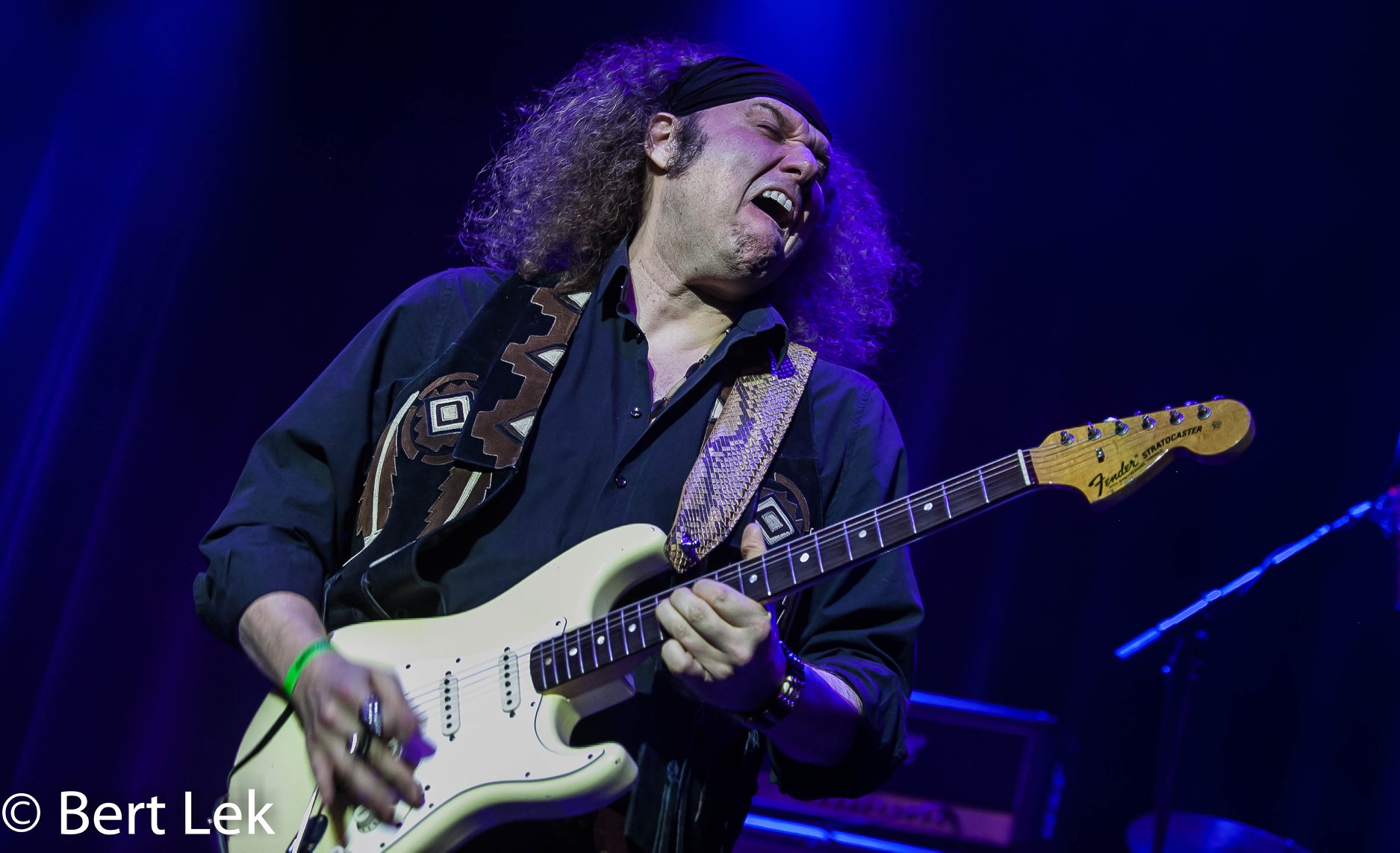 I was born and raised in the Centre of The Netherlands in 1970 and grew up In a small town and had a normal childhood. I was a very energetic child.The first years I spent my life living on a boat on the river. In fact I was born on that river. That river and it’s feel for freedom became a big inspiration in my songs that I would write many years later. When I was six years old, I saw a television show and saw this man doing a duck walk and playing a big red guitar, I discovered Chuck Berry and rock ‘n roll! I was completely mesmerized by that “red” thing…the electric guitar!!

I started dreaming about guitars and asking my parents for one, but they were not convinced about giving me one….
When I was eleven, I saw Jimi Hendrix on tv…that was it. Now was the time and yes my parents bought me a guitar a year later. When I got one, I was in heaven.
I started practising like a maniac, something I do until this day. I have no musical schooling and play by feel and what I hear. I am not a stranger to different styles and love many sorts of  music. Life and other music have always inspired me until this day.
I am influenced by Gallagher,Hendrix,Beck,Zappa,Allman brothers, lot’s of different types of Blues ,heavy metal, classic rock, Country, Jazz and so…..the list goes on and on..
I started playing in bands when I was 13 years old, I have always been a guitar player/singer throughout my whole life…and I love that combination.
After many bands and jam sessions, and sometimes a sidemen of older blues men, I wanted to have my own band and play my own music. So I formed the Julian Sas band late 1994. We played many shows the last 25 years, did a lot of touring and made a lot of records and dvd’s.
It has always been a band, searching for new forms within the style that it became. Musically we never stood still, but we were always going into different directions without losing what we do and what we are.
I have always been a very creative person, there are always lyrics in my head and lot’s of music. Music just keeps me going.
What also keeps me going is the fact that after all these years, I am still a dreamer and wandering spirit. Just like the river and  that never stands still and keeps going. I was born with a restless soul, who needs new things and travelling and exploring…..everything is inspiration and inspiration is music and music to me is energy and life……

I was born near Amsterdam, had a happy childhood, was an energetic child and music was always around as long as I can remember!

My mother was a classical pianist, my dad a jazz freak and my sisters listened to everything on the radio. Initially I wanted to be a drummer but there was no money for a drumkit at home. To partly satisfy my wish, for Christmas I received a bongo so that I could still play the ‘drums’ a little. But that bongo didn’t last long ..

Then I discovered the electric guitar.

Wanted to be a rhythm guitarist, but the guitar teacher didn’t show up the first three lessons .. so that was the end of my guitar career! My best friend just bought all of a sudden a bass guitar and that was the real game changer. On the one hand I had the rhythm of the drums and on the other hand there were the harmonies of the other instruments. The bass guitar was the completion of what I felt and really wanted. That is why I became a bass player.

I am a self made musician and clinician raised on music of Hendrix, Status Quo, Rory Gallagher, Gary Moore, Van Halen and others. I am influenced in later years by many bass players as there are Duck Dunn, James Jamerson, Phil lynott, Lemmy and Pino Palladino. For years I had a column in the Music Maker magazine, recorded songs for the Bass Talk cd series and I am the founder and owner of the Bass Connection.

Played and recorded with a lot of bands during all the years, never stopped playing simply because I love it and I can not live without my bass.

When I was asked to join the Julian Sas Band, a new world opened! These guys breathe and live music and I immediately felt at home. Relaxed guys, motivated, high energy level, great songs and gifted musicians. It feels good to be part of this fantastic Brotherhood! 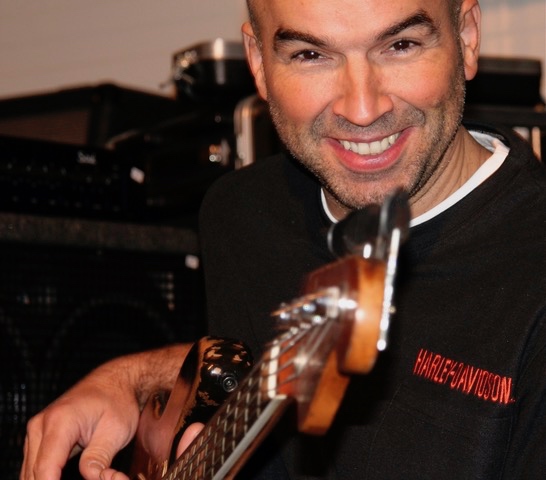 Born and raised in the Southwest of The Netherlands in 1970, music played an ever increasing role in my life. In my younger years my parents put me in an after-school music education class. And in my teens I started studying the piano for a few years, learning the basics of the instrument and ‘making music’ in general.
In those years I also started playing drums in the local brassband, which was both a musical as a social thing.

Drums fascinated me from a very young age. Although being a kind of “frustrated guitarist”, playing drums seemed natural as I had the tendency to bang on all kind of things and surfaces, driving everyone in my neighbourhood crazy.
I started with just one little Chinese tom with the rawhide skins tacked on the drum.
Later on my parents got me a real snaredrum with a stand and a little cheap cymbal for my birthday. For which I’m forever grateful because my drumming journey started there and then.

Taking no lessons but playing along to songs on the radio, records and music I (very) slowly progressed. And every birthday I got something to expand what would become my first drumset. First a hi-hat, then an old marching bassdrum with a crappy pedal and so on.
Untill they finally gave me a 5-piece drumkit, brand Maya in shiny blue.

Fastforward a couple of years, I began playing in all kinds of (cover)bands ranging from bigband-style to hardrock. Still my drum-education consisted of reading all sorts of music related magazines, visiting a lot of concerts and festivals. Buying a lot cd’s for playing along to and, ofcourse, the playing in bands.

My musical influences are very diverse, ranging from classical to jazz, though my heart belongs to old-school R&B, R&R, Blues and (Hard)Rock. The music I love to play!
Drumming influences are however from all musical styles. From Vinnie Colauita to Hal Blaine. And Billy Cobham to Earl Palmer. D.J. Fontana, Benny Greb but also Dutch guys like Hans Eijkenaar, Pierre van der Linden and Marijn van den Berg, to name just a few. All of them such musical and adventurous players who showed me “the way”.